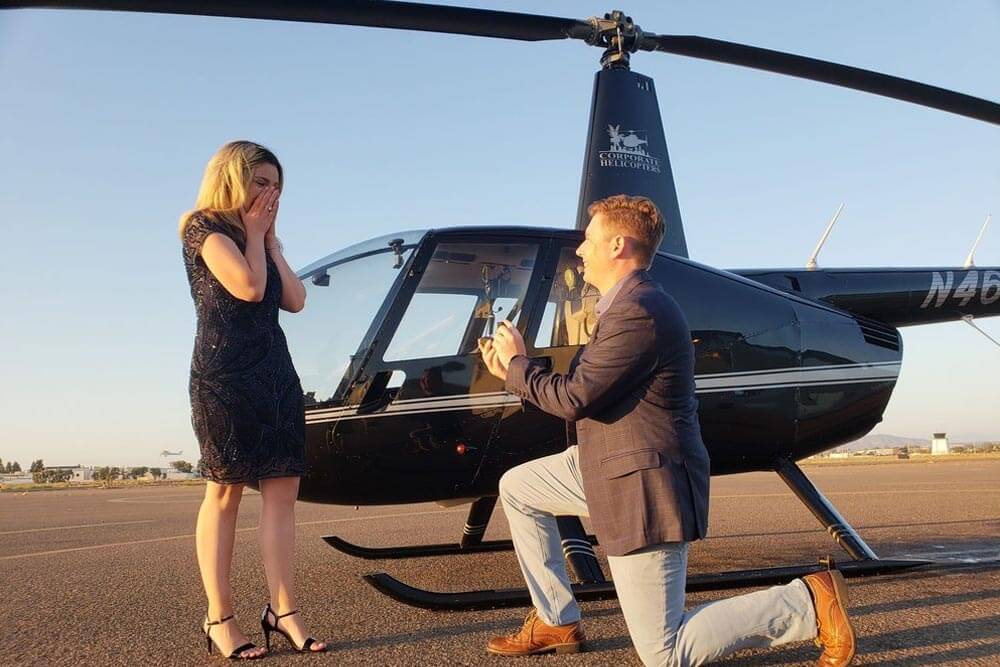 We wanted to close out the brutal year that was 2020 with some love.

This story is written in the form of a 5-Star review on Yelp from September 2018:

I had a reservation through Groupon with another helicopter company, and I was planning on proposing to my girlfriend inside the helicopter. Such a great idea, until the night before the proposal at 7:30pm I got a call saying their helicopter went to half power and would grounded for the weekend because they would not be able to get a mechanic out. I definitely thanked him for letting me know about this because I 100% did not want my girlfriend and I going up in his broken helicopter. They did not have a backup helicopter, so this left me late the night before with no helicopter for the proposal.

I started to panic, looking up different helicopter companies. No one was open. Realistically, who was going to have a helicopter available for a sunset flight, be accommodating for the proposal idea, and be affordable?

The first company I found was Corporate Helicopters – but they were closed. So I left a message, hoping I could talk in the morning – trying to plan this without my girlfriend finding out.

Before I could even have more time to find another company, I got a call 20 minutes later from the owner, Ivor. He was so nice! He said they were closed but he heard the panic in the message so he had to call and help me. He saved the day and told me he had me covered: He had a helicopter at sunset for me. He said he would let the employees know everything… all I had to do was call in the morning to finalize everything and pay.

I called in the morning as he told me. The employee told me Ivor let him know everything. I was able to plan everything without my girlfriend knowing anything. Plus I got a 15 min longer ride for not much more than the Groupon I originally purchased for the other company.

I showed up with my girlfriend and met the pilot, Vince Carter. He was so awesome! Super fun and friendly. He was in on everything and pulled me aside once we got my girlfriend in the helicopter to go over everything quickly. It went perfectly! They saved the day and made this one special ride. I would 100% recommend this company for their professionalism, cost and experience.

Out of all the things we do here at Corporate Helicopters, it’s really nice to have a part in wedding proposals.

Congratulations to Brenton, his lovely bride, and to the many couples who’ve gotten engaged here at Corporate Helicopters.

Where Are We? A San Diego Must-See Place
July 23, 2020
Latest posts
The perfect gift